How To… Use a Compass

Finding your campsite, a spectacular viewpoint or your way back out of the back country won’t always be simple tasks. That’s why a magnetised compass and a paper map—and the navigational knowhow to use them—are part of the Ten Essentials for the outdoors.

This article covers the following concepts:

Why not rely exclusively on a phone or GPS receiver? Because batteries can die and gadgets can malfunction. A compass relies only on Earth’s magnetic fields.

1. Get to Know the Parts of a Compass 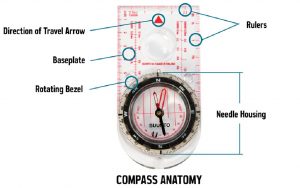 For this article, we’re using a compass that has all of the features you need for basic navigation: 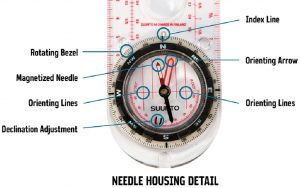 North on a map is easy to find (it’s at the top). In most locations in the real world, though, magnetic north (where your needle points) and true north differ by a few degrees: That difference is known as “declination.”

Because a single degree of error can set you off course by 15 to 20 metres over a kilometre, it’s important to accurately adjust for declination.

Before you can adjust for it, you have to find the declination value in your trip area. Topo maps list it, but the value varies over time. So check the map’s revision date or, better yet, consult the National Oceanic and Atmospheric Administration (NOAA) magnetic declination.

The way you adjust for declination varies with different compass brands (some use a small tool) and you’ll need to follow the provided instructions. Once the declination is set for a trip, you don’t have to think about it again until you travel to a faraway place.

Map reading—correlating what you see on paper to what you see around you—is a foundational skill that you should practice early and often. Before you can do that, though, you have to have your map oriented correctly.

Once you’ve set your declination, map orientation is simple:

Now you have the map oriented correctly and can identify nearby landmarks on it. Take time to become familiar with your map and surroundings before you head off. And keep reading your map along the way: Staying found is far easier than finding yourself after you’re lost.

A “bearing” is simply a navigationally precise way to describe a direction. For example, instead of heading “northwest” to get to a campsite, you might follow a bearing of 315 degrees.

Bearings are always relative to a specific location. Following the same bearing from two different places will not get you to the same destination.

Taking a Bearing from a Map

You can use a bearing to get to a location any time you know where you are on a map:

Now you can use the compass to follow that bearing to your destination:

Taking a Bearing in the Field

Now you can transfer that bearing to your map to find your location:

You can also use multiple bearings to find where you are on a map. If you aren’t on a linear feature like a trail, you can still find where you are on a map. Called “triangulation,” this process simply requires you to follow these same steps with a second and a third landmark, preferably ones that are at least 60 degrees away from your first landmark (and each other).

If the lines you draw meet at a single point, that’s your location. Most of the time, though, the three lines will form a small triangle—your location will be somewhere in or near that small area. If the lines form a very large triangle, recheck your work because you have at least one significant error.