How To… Read a Topo Map

Learning to read that paper topo map (short for topographic map) is essential. Your map will then be able to tell you a richly detailed tale about the terrain and area you’ll be exploring.

This article covers these concepts:

Simple track maps are useful for trip planning but NOT for navigation in the field. Topographic maps go further, giving you the power to visualise three-dimensional terrain from a flat piece of paper. The feature that makes this possible is contour lines:

Contour lines also indicate the shape of the terrain. Roughly concentric circles are probably showing you a peak, and areas between peaks are passes. Studying a topo map of a familiar area is a great way to learn how to match terrain features with the contour lines on a map.

Index contour lines: Every fifth contour line is a thicker, “index” line. At some point along that line, its exact elevation is listed.

Maps also have a representative scale to help you visualise real-world distances. You can use this scale and a string or the edge of your compass to get a rough estimate about hiking distances on your map.

Look closely at the map legend. It’s loaded with map-reading clues and navigational data. Start by studying what each line, symbol and colour means. Generally, green indicates denser vegetation, while light or colourless areas suggest open terrain. And, as you’d expect, streams and lakes are shown in blue.

The legend also lists key data like the map’s scale, contour- and index-line intervals, grid systems (used for more advanced navigation) and magnetic declination (needed to set up your compass). 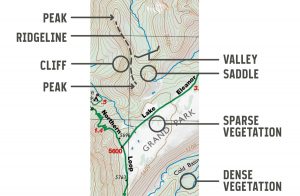 Practice reading features from a map of a familiar area. Visualise how the terrain on the major landmarks relates to the contour lines on your map. Pick out features like peaks and saddles. Identify subtler features like cliffs, which have contour lines grouped tightly together, and ridge lines, which connect peaks and have contour lines that decrease in elevation on each side. Valleys are low-elevation areas between ridge lines; some might have a creek running along the bottom, though that isn’t a requirement for a feature to be a valley.

Hone your map-reading skills on every trip. Pull it out at the start of your walk, orient it correctly and mentally check off landmarks as you walk. Regular map readers rarely get lost.

Where To Get Topo Maps

Several companies produce enhanced topographic maps. They highlight key features and update details regularly. These maps are more likely to be available for popular areas. (Finding a map for a lesser-known area will be more difficult.)

Additional features that can make a map more valuable include:

Many public land areas (national parks, national forests, recreational areas) produce maps to cover the land inside their boundaries. Check their websites to see if they offer printed or downloadable topographic maps for backcountry users.