While many people consider unplugging to be an essential part of immersing themselves in the natural world, it’s also true that there might come a time when one truly needs to call for help. Smartphones, which are seemingly in-hand 24/7, are a tempting solution, but 111 networks offer limited connectivity in the outdoor domain.

When you’re on an outdoor adventure, PLBs and satellite messengers are your two best options for sending distress signals.

In short, choose a PLB if you want to avoid subscription fees and/or you’re solely interested in being able to send an SOS in an emergency. Choose a satellite messenger if you also want to be able to send messages to loved ones and/or are interested in additional features like navigation. 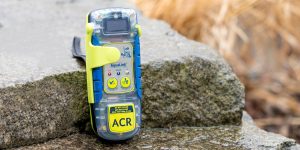 This satellite-synced device sends an SOS signal to rescue agencies, along with your location. Key attributes include: 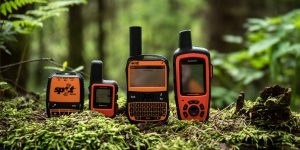 This device can also send an SOS signal; additionally, it offers communication options and a wide range of other functions. Key attributes include:

PLB and satellite messenger brands don’t all use the same satellite networks for SOS signals and global reach varies. If you’re going to a remote area, check the coverage map for the device(s) you are considering.

What About Your Cellphone?

You might have seen a story about a national park installing a cell tower, or about thru-hikers who rely on their cellphones. However, while it’s true that cell coverage is getting more extensive and creeping farther into wilderness areas, that coverage pales in comparison to both PLBs and satellite messengers. So, if your goal is to have a dependable way to call for help in an emergency, your cellphone can’t compete.

If an emergency were to happen in a place where you got a cellphone signal, then it can be a valuable tool and you shouldn’t hesitate to use it (along with your PLB or satellite messenger). Having a live conversation offers you a quick way to exchange important information with rescuers, and with family and friends. 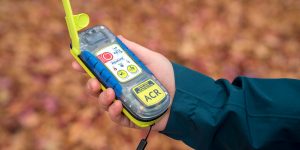 PLBs are smaller land-based cousins of Emergency Position Indicating Radio Beacons (EPIRBs) used by boaters. When you activate a PLB, it transmits a powerful distress signal that’s received by a global system of satellites.

After receiving your transmission, the satellite system relays your distress call to a network of response agencies, which ultimately results in your plea for assistance reaching a local search and rescue organisation. PLBs also utilise another satellite network to get a location fix. In addition, most PLBs today can provide rescuers with GPS-provided coordinates to pinpoint your location even more precisely. A PLB with a strobe light can further aid rescuers when they search.

Because the satellite system and response-agency alliance are part of a global network, a PLB works worldwide. Responses won’t be as robust in countries where search and rescue resources are limited, of course, and a handful of countries don’t permit their use. So you’ll need to do a little homework to contact foreign authorities if you plan to use your PLB abroad.

PLBs Must Be Registered

If you buy a PLB, you’ll be required to register it. Your PLB unit’s distress signal is then associated with vital personal information (like name, address, emergency contact phone numbers and medical conditions) that can help speed the response time for your rescuers. Note that if you ever sell or transfer ownership of your PLB, you must report that and the next user is then required to register their personal data.

A PLB comes equipped with a long-lasting lithium battery. This battery remains dormant until you flip the switch to activate the PLB. Regulations require a PLB with a class 2 battery (the type of compact PLBs sold for backcountry use) to be able to transmit at -20°F (-28.9°C) for 24 hours. Such cold temperatures represent worst-case scenarios, though, and most PLBs will be able to transmit for than 30 hours in milder conditions.

Because its sole job is facilitating an SOS transmission and it remains dormant until you flip the switch to activate the distress signal, a PLB battery can last for five years—and you never have to fuss with recharging it. The downside is that battery replacement requires the unit to be sent to a dealer and replacement costs are substantial.

The battery will also need replacing after any activation, though PLB makers typically replace the entire unit free of charge if you activate it for a life-saving rescue. 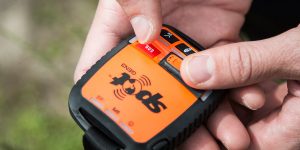 Satellite messengers are similar to PLBs in that they also allow you to send SOS distress signals from remote areas where cellphone coverage is sketchy or nonexistent. They’ve surpassed PLBs in popularity, though, because of additional features like the ability to exchange texts from home and to do GPS navigation.

Satellite messengers are devices that rely on GPS satellites for location information and commercial satellite networks for communication. Emergency distress signals are routed to the privately run GEOS International Emergency Response Coordination Center headquartered near Houston. The centre coordinates with local search and rescue agencies and can communicate with you via text as your emergency response progresses.

Similar to PLBs, satellite messengers rely on global satellite networks so they work worldwide, though responses won’t be as robust in places where search and rescue resources are limited. It’s also wise to double-check that using a GPS device is permitted in any country where you plan to travel, because a handful of security-obsessed states have banned GPS use over the years. You should also ask your device’s manufacturer for a current worldwide coverage map to be sure you’ll get a signal where you plan to use it.

Satellite messenger brands are adding new features at a dizzying pace. Additional features you might find, which vary based on the model, include the following:

Prices vary significantly, depending on the type of features that come in the unit you choose.

A subscription plan is required to use a satellite messenger, and it’s a major expense. The major manufacturers, Garmin and SPOT, offer a variety of options, and choosing the right one can feel as complex as picking your cellphone plan. You’ll be required to pay an activation fee and a monthly fee that varies based on the level of usage you choose. Most Garmin plans and SPOT plans require a yearlong commitment, though you can also find month-to-month alternatives.

Brands’ optimistic projections for battery life range from a couple of days to between 10 and 20 days. Having a broad range of features and rechargeable batteries is a double-edged sword, though. Just as it is with your phone, you have to be mindful about feature usage in order to maintain battery life.

When to Send an SOS Distress Call

Just like a 111 call, a distress signal should only be sent when you’re in imminent danger of loss of life or limb, and when no means of self-rescue can get you to safety. As more and more new people venture into the outdoors, the problem of groups placing unneeded rescue calls has become a major burden on search and rescue groups. That strains their resources and impacts their ability to respond to true emergencies.